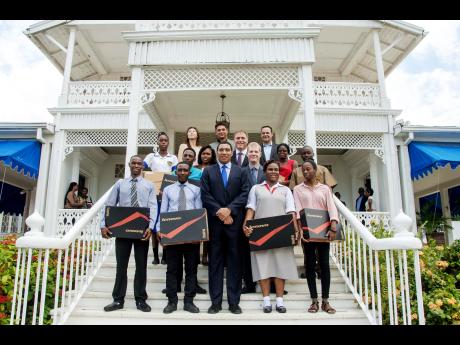 Prime Minister Andrew Holness, on September 9, handed over the first nine of 40 laptops to high-school and university students which were donated through a partnership with Lenovo and AMD Inc.

Holness, in a meeting at Vale Royal with representatives from the companies and local partners RMP & Associates, said the contribution fits well into the Government's push to bridge the digital divide and create greater accessibility to technology.

Corporate vice-president and general manager of the Lenovo account at the global processor manufacturer AMD, David Bennett, said he decided to make the donation after seeing images of the prime minister on social media handing over computer devices to students.

Director of channel sales at Lenovo, Michael Abplanalp, said the company has been very dedicated to education and helping students acquire devices to advance themselves. He said this was an opportunity to further that drive as well as build out its partnership with Jamaica.

The first set of computer devices were given to students in the prime minister's St Andrew West Central constituency, while the others will be donated to students from other communities.

Tavell Nelson, one of the recipients, is a student of Ardenne High. He described it as an honour to have been selected for the donation and said he was elated.

Another recipient, Shantel Haase, who will be studying medical technology at the University of Technology, said she, too, considered it a privilege to receive the device. She said it will make a significant difference to her studies at this stage of her educational journey.